A few thoughts about my work:

A central element in my work is the continous process of mutation, change and transience. The change of our society from an industrial society to a postmodern culture is reflected manifold in those deserted wrecked cars, symbols of a time bygone, a faded dream of the limitless possibilities of technology. On a macroscopical level natures seemingly timelessness is found, the illusive unchangeabilty and duress of landscape gets formulated in the paintings of the "primal land"series, devoid of human traces. But the deserts as landscapes are questioning this directly, as even in the microscopic timeframes of our civilisation man acts as transformer, he "desertificates" nature and leaves his fading traces in this process. Another element i see, in this continous process of change and transience, which also confronts as with our primal fear of our own transience, is to find an esthetic element, to transform the superficially ugly into something beautiful, to wrest some greatness from the tragedy of decay. Beauty, for a respectful and loving gaze, can also be found in decay and transience, and not only in the superficially and kitschy concept of beauty, which is just a onesided lie anyway. The ugly and broken things in this world are always a necessary part to close the circle, but they can also be beautiful, even if it is just the half hour, in which a crumbling facade of a house in the afternoonlight morphs into a fascinating world of light and shadows.
And what could be even better than trying to wrest some beauty from everything?

Why "postindustrial landscapes"? Well, after all we are in the midst of a change into a postindustrial society. Apart from this we can see the results which the industrial age leaves us quite clearly. Climate change, desertification, processes which we won`t turn around during our lifetime. The times of a naive believe in progress are probably gone. I see cars as a central symbol for our believe in technic and the unlimitedness of progress. Especially the american cars of the golden decades from 1950 to 1970 symbolize the rule of "the bigger the better" perfectly. Apart from this they also have a certain decadent charme. Deserts are landscapes which fascinate some, terrify others, it is difficult to take a neutral stance in regard to them. Their emptiness and quietude forces us to fill them with our own life energy. At the same time they are a result of our civilisation, which is continually creating new ones. Therefore the combination of wrecked cars and deserts is obvious in its symbolic power. The created paintings are recombinations of elements that i have seen and experienced, nature, being a random process, does hardly ever offer the painter the perfect composition. So things i have seen and felt are the inducement for a painting, accordingly it gets composed. During the painting process i try to create a feeling of realism and liveliness, which cancels the distance between observer and painting, in this sense it is not just painted, but seems quasi documentary and real, depicting a reality which has to be dealt with in some form or other.

Industrial ruins illuminate the transformation of our society in another way. Even these seemingly indestructible monoliths of our culture are being gnawed away by the tooth of time. Robbed of their functionality, they are reduced to just some other traces, which can be secured in a quasi simultaneously running archaeological utilization of our culture. Venice in its uniqueness demonstrates wonderfully the beauty which can be found in the tragedy and morbidity of destruction. But both are far away from the banality of our other habitual living spaces, the uniform suburbs and functional structures and cities which are surrounding us and whose everydayness entices us into a thoughtless handling of our visuell surroundings. The moment of pausing to think and switching to conscious observation of what we see, happens much to seldom. With this series i want to create visual moments which force us into another and more conscious way of observing, enigmatic windows in time, which pose questions and offer us the possibility to feel the emotions in these places, could or would we visit them. Naturally some of these paintings come into being in rather complicated assemblies and a lot of complex construction work. The trick hereby is, that everything fits together in the end and looks plausible in a sense of "real".

Since many years i am interested in landscapes and their manifold manifestations. Whether as elemental landscape devoid of human traces, esthetically experienced civilized landscape, or as a relict and visualisation of destruction induced by civilisation, the theme has many aspects. The emotional content of landscape and its manifestations equally plays a role, like the pure "painterly" stimulus, which has to be felt as well, to choose a scenery for a painting. The paintings of the primal land series especially reflect landscapes in which human traces do not appear or are just marginal. They reduce us with their power to a midgetlike anecdote, and make the greatness and huge timeframe of nature palpable. This way our civilisations achievements, usually considered as so very important, get reduced to just a peripheral phenomenon. The same goes for the individual level, our importance shrinks, when we place us in relation to the powerful context of nature and the world as a whole. This is always an oppor tunity to check our personal value systems. Apart from this aspect, the power and beauty of nature also offers the possibility of achieving "oneness" with this greater entity, with the power of life. Generally i see landscape as a theme, which always contains the potential of a highly emotional interaction with us humans and this namely on a deeper, metaphysical level. The formulation of this interaction and the enhancement of this by appropriate change and invention regarding the observed sceneries is the goal of these works.

In a portrait the person lies for me embedded in the reality of his physiognomy. The latter is for me always a direct expression of his being and experience. Life burnishes its traces in every detail. Therefore i do not tend to a carricaturing view of a persons appearance, which might be useful to enhance singular aspects, but which renders a person, in my opinion, seen as a wholeness, only incomplete. So the appearance of man reflects for me his psychic reality, the symbolic - abstract serves inevitably the illustration of more generell human conditions. Naturally, as a painter, you interprete as well, just by choosing composition and the selection of situation and moment used for the painting. In an age of arbitrarily available massphotography the importance of realistic portraitpainting often gets popularly questioned, just like realistic painting in general, therefore a few thoughts on this theme in this place.
Like every technical instrument the camera gets overvalued quite often, but to say it plain, it just dumbly records what is in front of the lens. The painter, on the other hand, has an infinite amount of possibilities, for he decides with every stroke he makes, he decides continously. These decisions underline what is important for him and suppress what is not of relevance. So, if nothing else, you can incorporate a portrait with a spatial presence, which i could never find in the best photoprints, no wonder, as a camera cannot interpret space in its relevance in detail. This doesn`t mean, that you cannot make good photographs, after all this depends on the eye of the photographer, but you cannot compare photos and painting, they work completely different. Still the camera is a helpful instrument for painters, todays realism was not possible before photography came up.

I see still lifes as another aspect of collecting traces. Objects derive from a specific time, have been produced by people and in the course of time, have been passed from person to person in their own idiosyncratic time window. In this way they gain importance on different levels, in regard to historical epochs and their owners. Would this be trivial, man wouldn`t fill museum after museum in a gigantic collecting crazyness, and millions of people wouldn`t contemplate them. Fact is, just as we define ourselves by the things we produce, we also define ourselves by what we own. One of the traces we leave in life are the objects with which we surrounded us, which can tell something about us as a person. So maybe this clarifies, why still lifes can tell stories on different levels or can start many associations in us. According to the amount a viewer can find himself and his memories in the objects of a painting, he can immerse himself in his own stories, which are connected to these or similar objects. What will we leave, what will be our traces? 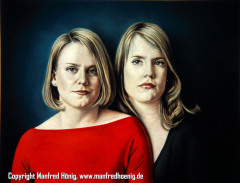